The second F3D team trial for next years World Championships to be held in Sweden, saw competitors arrive on the Friday from South Australia, New South Wales and regional Victoria. Baz Murphy’s much loved Munro field, a purpose built, immaculately presented and maintained pylon racing facility, was set for a show down. This the pinnacle of the highest speed, pilot and plane combinations all with the passion for precision racing would test the very best to achieve their rightful place on the Aussie F3D team. Results over the past few months have been chequered and pilot placings in probably one of the hardest teams in the world to get onto would be up for grabs this weekend. 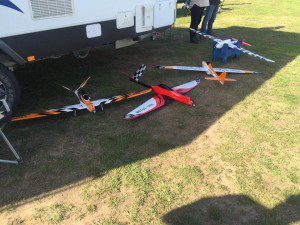 As per the past few race meets at Munro, the weather Gods rolled up for Saturdays racing in East Gippsland. With 10 F3D pilots competing in Victoria’s State Championships. The heat 1 draw was for the Minute Master Munro team and great mates Beau Murphy and Dannmann (Daniel Arapakis). Round after round, the fluro red and bright orange wings battled it out to get clean air….Dannmann with his place already set as the Aussie Junior, was free to give every round his very best against his trusted mentor Beau. Beau as conservative as possible, flew famously well as usual and averaged an event time placing him on the Aussie Team with 2 times recorded now after 2 team trials. The awesome duo of Beau and his long time mate Leigh Hocken who also has two times in with a great performance in QLD a few weeks back, have their places squared away on the Aussie Team for the next year World Champs.

Just as impressive as the first day us southerners met the Jacobsens’ from SA, Shauny mixed with the best in his usual perfect style that will prove out his competitiveness and future success. With only a hand full of F3D races under his belt, Shaun flew his PB of 59.28 seconds and while carrying a cut, Shaun averaged a 61.1 seconds to place him in a very good position for the 3rd team senior member on the Aussie Team. 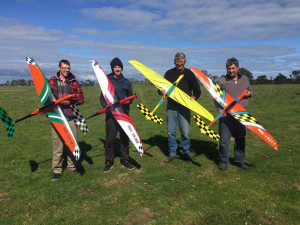 Great to see Tom Jacobsen, the “Great Dane” larger than life, flying well with plenty of smiles. Leigh Hocken had pace as always but carried a 200 finishing in 4th and 5th respectively. Great to see Ranjit Phelan with yet again another big drive down from outer Sydney to compete in his life passion of F3D racing. Frank Cassella and his family watching and supporting his high speed passion with the most highly polished racing red Voodoo also bringing along his ripper smile enjoyed the perfect conditions at Munro. Brian Steele and Andrew Davies, the two infamous beer monsters, had a tough event with a few too many DNF’s. Jarrod Jacobsen, Shauny’s number one caller and brother in his first time in an F3D event suffered an unfortunate technical problem resulting in wing folding in his first heat, will see him having another go in this very testing class of F3D!

As F3D team trial selection takes priority, 8 rounds were flown on Saturday with Dannmann finishing in 1st place and recording the fastest time for the event and his PB of 57.21 seconds, Beau in 2nd place and Shaun taking out 3rd. Well done to all pilots and to a great F3D event and State Championships. 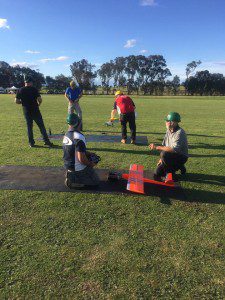 With 7 pilots primed and full of adrenaline, pilots took to the perfect afternoon conditions racing for 3 rounds before sunset took over. Unfortunately no more rounds for this class were on the Sunday due to poor weather. Proving the fact out that consistency wins races, finishing any event with no cuts puts you in prime position. Jim Orenshaw who recorded the fastest time of the event with a 96.13 seconds, is always a great competitor. This time round, Lilydale Club President, Gary Whitbourn took out the podium with 1st place, closely followed by Ian Rickard, Munro’s very own grounds keeper in 2nd place and Alan Whitbourn in a very proud 3rd place which was a fantastic weekend racing result. All three trophy getters have put in the hard yards and have been finally rewarded with State Championship trophies – well done guys.

With the unfortunate weather conditions closing in on Sunday, F400 was not raced and the State Championships Trophy for F400 will be competed for at the next event which will be run at Munro on October 15-16.

Many thanks to all the pilots and helpers that turned up and participated and made the event one to remember.

This was only the 2nd event for this Season Championship.

Leigh Hocken has popped up into the top position, pushing Brian Steele and Andrew Davies down a position respectively.

Jim Orenshaw has remained at the top and the father son team of Gary and Alan Whitbourns have popped up into 2nd & 3rd positions.

As this was a team trial and racing on a 10 lap course rather than our usual 10.5 laps, fastest times for this weekend won’t be included.

WPMAC – Western Port Model Aircraft Club located in the seaside town of Crib Point hosted what is no doubt now one of the best Sports 40 and Quickie 500 races on the calendar. Crib Point is the home of HMAS Cerberus and is the Royal Australian Navy’s primary training establishment with history dating back to 1911, now trains 6000 personnel annually with about 800 trainees on-board at any one time.

With the ground swell of Pylon at WPMAC, the committee and members prepared the field to the highest standards putting on awesome flying weather conditions with a light northerly of about 10kph.

Bystanders and new flyers witnessed and took part in a great day of camaraderie, fun, flying and quick times from some of the more serious quickie pilots. Probably one of the most rewarding events to me as the Dad of Dannmann, was to assist and be part of showing a crowd of almost 80 people, something very special that I have shared with my son for 3 years now in flying Pylon. Great to see new father and son team of young Xaviour and Dad Matt Noonan flying in their very first event, learning heaps at every round and like wise with young Cameron Sexton and Dad Gavin, pushing themselves on every lap. It was also great to see new pilots from WPMAC have a go in the Sports event for the very first time, enjoying the fun and adrenaline rush for every second of the racing.  Wayne Newman the owner of Addies Hobbies recovering his new model in iridescent fluro’s calling it the Coxy Killer brought a sensational spirit to the racing definitely pushed Alister Cox to the limit.

With 4 rounds of Sports 40 and Scanner racing after a great race demo between Dannmann and Jimmy saw Manny Reiderich take out 1st prize with his buddy Mick Kellet as his caller. Great to see Mark Jacob return to this event and also posted the quickest time of the day of 142.6 seconds claiming 2nd place and an ambassador to our famous club Alister Cox flying a ripper race with no cuts on the podium with 3rd place. New pilots to the event were Club President Mr Brian Holmes, Matt Noonan and Justin Trist, all having a great time !

After a banquet BBQ lunch,  the Q500 field consisted of 13 pilots, battle it out also for 4 rounds. Mark Jacob with his scratch built Quickie, Cameron Sexton with his trusted Angelov model, Lucas Newman with his brand new Viper 500 all flew great as new comers to the racing. It was a ripper to see Matt Carter from Hasting Hobbies returning to Q500 racing with great reliable racing. Young gun Austin Omann cut him self out of the race as to did Dannmann after recording the fastest time of the event of 94.30 seconds. Young Cameron Sexton is now recording times under 110 seconds with his caller Dannmann mentoring him for future success. Veteran racers took the podium on Sunday with Mick Kellet returning to racing and was rewarded with 1st place – onya Mick and we are all very glad to see you return with great spirits and fantastic flying. Jim Orenshaw flew in true style taking 2nd place and well deserved after years of commitment and passion to this sport and so with Gary Davidson at 70 years of age showing up the rest of the field.

No doubt the weekend was one to remember with fantastic club spirit and passion for this very unique aspect of aeromodelling that is tremendously rewarding. it is a combination of fun, a winning spirit, strategy, and the 3 P’s says Baz Murphy – patience, perseverance and practice!

Well done to all pilots, callers, helpers, members, visitors, committees of both WPMAC and VMPRA for a great weekend of flying and fun!