We are racing at the Bendigo club at Marong on July 13-14.

Andrew Davies has been in contact with the club and has confirmed that it is fine for those interested in camping at the field to do so. Campers need to contact Andy Thomas (Bendigo President – see http://www.brcac.asn.au) so he can advise where to setup and of any other requirements. It’s great that so many clubs allow us to do this. There is also camping nearby at the Marong caravan park. 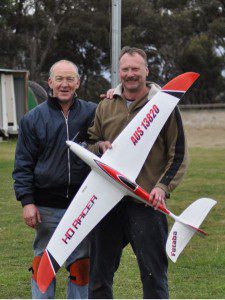 It was originally envisaged that we would hold our AGM at this event which has been the tradition but as there will be a significant group away at the F3D World Championships, we will hold it at a later date to be advised.

On the subject of the F3D World Championships which is to be held in the Netherlands between July 23 and 28, 2013. We wish our members who are travelling to Europe and participating in this great event, all the very best for the trip and the competition.

Beau and Barry Murphy and Ranjit Phelan and Rick Townsand are VMPRA members representing Australia. Matt Young is also representing us as a junior with the help of Bruce DeChastel as caller and supplier of models and engines.

Team New Zealand is being represented by VMPRA members, Tom Wetherill and Jim Orenshaw. Toni and David Axon are also travelling to the Netherlands and I would imagine, will be involved in some way. I hope I haven’t missed anybody out.

Also from Queensland, Chris and Kevin Callow and Tyler and Warren Mees are represnting Australia.

We can’t wait to hear news of how you all go.

I’ll try to post any information that becomes available during the Champs.