Well, according to the VMPRA.org.au event  count-down, it’s just over 2 weeks before the event at Cohuna. This event (Sept 15-16) is the 3rd selection trial event for the next F3D World Championship in the Netherlands 2013. It promises to be a hotly contested event in F3D with several of our northern friends making the trip down to compete and we should see most if not all of the winning 2011 F3D WC team flying at Cohuna.

As this is a selection event for the F3D WCs, this will take priority, but there is also going to be F400 flown after 9 rounds of F3D has been completed.
Note: There isn’t going to be any Q500 flown at this event but you can still come along and get involve with helping out, fly in the other classes and enjoy some really quick racing.

So it’s time to make your preparations and have accomodation organized ready for this great week end.

While we are at Cohuna, over in Romania, the F5D World Championships as getting under way. Having seen Rick and Beau fly these models earlier in the year, we have had a chance to see just how quickly they fly. Australia is sending a team, so we’ll being keeping an ear out for news on their progress. Good Luck guys.

See you are Cohuna
John Schmidli 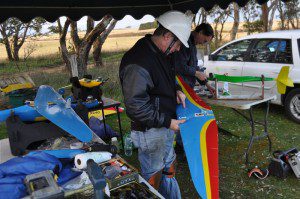 Jim .... recovering components after a mid-air with Brian Steele

What a great field is Bazza’s padock. AMPRA is going to be flown here next year! The weather was very good with light winds and light cloud cover if not sunny.

It was good to see some Paul Schmidt after a long break from pylon and Marcus Guss was back for the 2nd time at Munro this year. 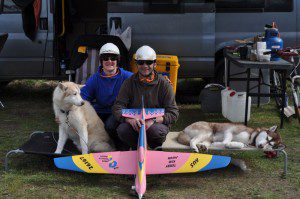 Kim, Terry, their huskies and a winning GR7

There were only a couple of incidents over the weekend, most notably was a mid-air between Jim Orenshaw & Brian Steele in FA1. Both continued to fly with backup models.

All in all, another great weekend’s pylon racing.

We have also started the 2012-2013 season championship table so the challenge is on to score high points and compete in as many events as you can.