Camperdown is an agricultural centre located on the world’s third largest volcanic plain and is surrounded by large salt and fresh water lakes. For the slope sourers among us, volcanic peaks such as Mount Leura and the ripper spot at the end of the Lakes and Craters Caravan Park also have fantastic views of the lakes in this region. 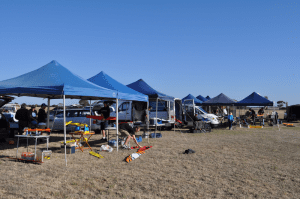 Setup on the Saturday morning, with hot weather predicted, There was plenty of Gazebos to make the pit area nice and shady.

Located within the Camperdown Race Course, the CMAC President Foster Taylor’s hand shake warmly welcomed all competitors to the traditionally hot weekend and also the first race meet of the 2016.

Friday saw many competitors arriving in the early afternoon to set up shade and test fly their pride and joys. Customary to recent meets, the line up for the weekend would be F400 starting each morning followed by Q500 then the missile class FA1 (F3D). 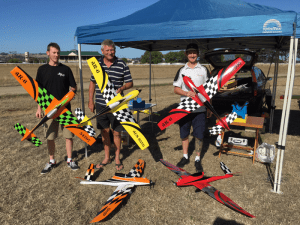 Competitors attending the Victorian Miniature Pylon Racing Association (VMPRA)  Trophy, showed up in good numbers from far-a-field with some pilots coming from as far away as South Australia, Sydney and Bairnesdale having travelling many hours to compete. With a staggering line up of world class competitors, there was 12 pilots in F3D, 15 in F400 and 12 in Q500.

Saturday temperatures were forecast to peak in the mid 30’s which is a challenge to all competitors. Beers where put on ice ready for the end of the days racing. 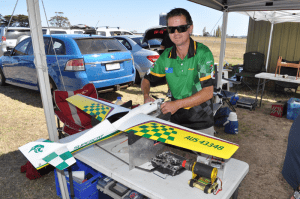 F400 was hotly contested with Leigh Hocken’s first round setting the fastest time recorded in this class for the weekend of 61.75 seconds which is a time that most F3D pilots would be proud of. The battle continued with great racing from the Jacobsens with the final results being the ever consistent Shaun Jacobsen taking out first place by 0.3 seconds with his rocket red AR-6. Leigh Hocken can in 2nd place and Jarrod Jacobsen took 3rd place. This class is always exciting to watch as the out of the box equipment is ever so competitive. 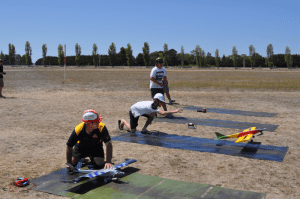 With a broad rage of experience, the Q500 contestants enjoyed a ripper event. 8 rounds in the peak of the heat saw a lot of fun had by all. This stock class again produced some very quick times and it was great to see Mick Kellet return to racing and being very competitive. Really only a hand full of seconds between most place getters saw NZ F3D pilot Tom Wetherill taking out 1st place with consistent mostly sub 100 second times. He was followed by the fancy florescent pink, Addies Hobbies sponsored plane flown by Mick Kellet. 3rd place was taken out by the every reliable John Schmidli. Well done to all pilots for having a go. 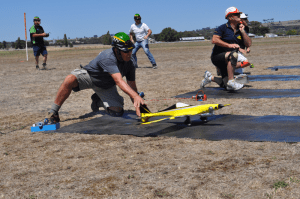 F3D commenced mid afternoon on both days, 12 pilots spread across 4 heats battle high temperatures and hot racing. Shaun Jacobsen entered the F3D circuit for the first time and made it look easy getting into the grove early in similar style to his F400 flight path. Phelan’s newly designed and built V-Tail also had it maiden race with the world watching on.  For 8 rounds of F3D, the Victorian based Aussie F3D Team pilots battled it out. Some spectators said that the racing witnessed this weekend was the best racing seen in a very very long time. All three pilots ripped into the 10 &1/2 lap course lap after lap. All three Aussie Team pilots are sponsored by JR through Model Flight with the root of their flying days starting out in Gippsland. Friendly camaraderie and competition saw Beau Murphy finishing in 1st place, Leigh Hocken in 2nd place and Dannmann Daniel Arapakis finishing 3rd after a last round cut – all flew their very best and unique styles and was fantastic to witness such a high standard and competitive racing! Perfect engine work with start ups every time combined with ultimate precision flying is no doubt the success to this F3D class. 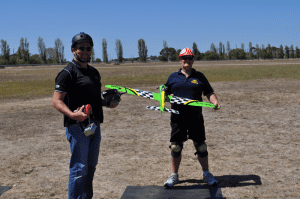 The annual VMPRA Season Championship trophy score board for season leaders remains unchanged with Dannmann now on 43 points extending his lead in F3D, Brain Steel 1st place with an aggregate score of 45 points in F400 and Jim Orenshaw currently running in 1st place in Q500 with a total points score of 46. 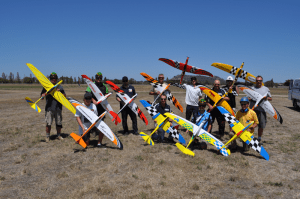 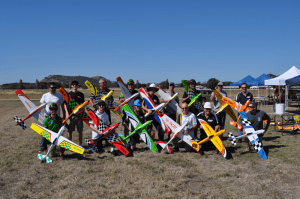 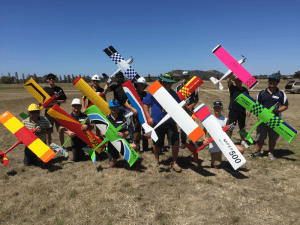 No change for the top 2, but Barry Murphy has moved up to 3rd position from 4th.

Like FA1, No change for the top 2, but Shaun Jacobsen has moved up to 3rd position, displacing Jim Orenshaw.

We are back at Bazza’s Paddock in Munro for the next event which is the John Hughan Trophy. This event is on the weekend of March 5-6, 2016.
Hope to see you all there.