From the AMPRA organizers:

Don’t forget to get in early and book your accommodation.  There is not a great deal of options in Maryborough and traditionally the QB weekend is a busy time.

Pylon racing in Victoria was off to a start for the first time this year with a return to Camperdown. As with nearly every race since June, weather had an extraordinary effect on the race. It was hot hot hot! 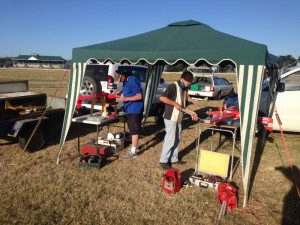 I’m not sure if it was the predicted hot conditions or the fact that this race was a little early in the year than usual, but numbers were a little down but all who attended seemed to have a good time and the weather actual led to extra socialization after racing finished on the Saturday both at the field and back at the Motel.

Proceedings started on the Saturday with 4 rounds of F400, followed by 3 rounds of Q500. After lunch the day was finished off with 4 rounds  of FA1. Sunday started early at 8:30 to try and beat the heat with 3 rounds of FA1, 4 rounds of  Q500 and then 3 rounds of F400. Then we had lunch and headed home early. There was some good clean racing and no models went home in a plastic bag. There was only some broken props and under-carts as the ground was a little hard and uneven. 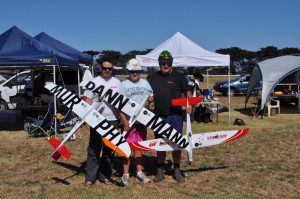 The masters and their apprentice (Beau & Barry Murphy and Daniel Arapakis).

There was only 4 people competing this weekend which was really down on recent numbers. Daniel was quick as usual but was finding difficult to get a clean round. James was in form with mostly  clean rounds. 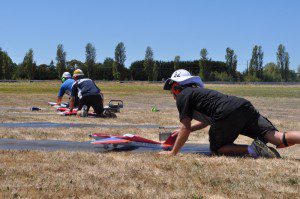 We are over half way through the 2013 – 2014 VMPRA Championship Year with only Bacchus Marsh (Q500 only), Munro & Warrnambool left to go.

Barry Murphy is in a very strong position in first place, Brian Steele remains in 2nd and a change in 3rd place of Gary Davidson displacing Glenn Matthews who is now in 4th position.

Glenn Matthews is now in 1st position after displacing Andrew Davies who is now in 2nd place. Gary Davidson remains in 3rd place.

No change in Q500 for the places with me (John Schmidli) in 1st, Daniel Arapakis in 2nd and Jim Orenshaw in 3rd. 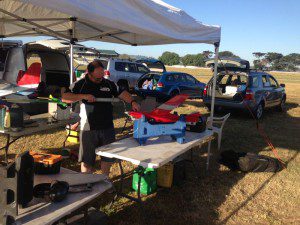 For the Q500 pilots, there’s a race at Bacchus Marsh on March 2 which will also include EF-1 & Sports.