The Annual John Hughan Memorial Event was held at Munro for our monthly Pylon Race.

John Hughan was at the forefront promoting pylon racing in the 70’s and was instrumental in the formation of AMPRA itself. John greatly assisted the pylon flyers and helped instigate several F3D rule changes as well as the plane dimensions that we now all enjoy. Hughan was remembered by all as a pylon racing enthusiast who loved the hobby and pylon racing. For many years John also was a column writer for Airborne Magazine with his regular article, “Pylon Round-Up’, which included great stories and technical information for precision aeromodelling and hence the significance of this weekend flying for all pilots.

The Munro field after the peak of summer was in impeccable condition with the grass, perfect as always and now with a facility upgrade of a substantial roof structure for all competitors to use. Gippsland’s local pylon pilot David Chippendale, together with the assistance of Ian Rickard, championed the construction that will no doubt stand the test of time (and a tornado or two)!

Pilots from far and wide arrived on Friday for model set up and engine testing for an exciting weekend ahead of racing. The weather Gods were kind to use yet again, with a  forecast for perfect conditions for all to enjoy during this fantastic weekend racing.

As per previous events the weekends racing schedule was for F400 then Q500 followed by F3D.

Scores for the Saturday were very impressive until we discovered a computer glitch which left many pilots discussing this around the dinner table that Saturday night. 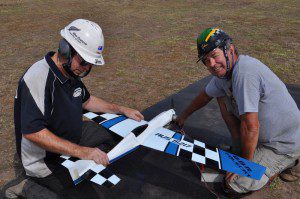 Formula 400 - Ready for the 60 second count down to start. Ranjit Phelan and his Polecat held by his caller, Jim Orenshaw.

The F400 class yet again was very competitive with 10 pilots challenging themselves round after round. Baz Murphy recording the best time for the event of 66.26 seconds. Our very own man of steel, Brain Steele with help from his good mate Andrew Davies, took out top prize with Baz second and Ranji in third. Only 10 seconds between the top 3 place getters and the rest of the field flying really well too!

Q500 saw 8 pilots compete with a mix of beginners through to experienced pilots. A variety of hand crafted and precision molded planes enjoyed the conditions and fun was had by all. Apart from a mid-air and various unfortunate terra-firma incidences, fun was had by all. Jimmy and John battled it out for first and second place and Andrew (Dannmann’s Dad) finishing in solid 3rd. Jimmy recorded the best time of the event of 95.44 seconds with a very special mention to both Ian Rickard and David Chippendale for their PB’s. 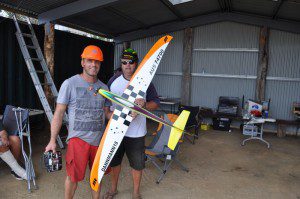 F3D witnessed Mark French returning to F3D with a Minute Master fuz from Leigh Hocken and wing from Dannmann. Quite a colourful combo for this model as the engine was also a first for Dannmann setting it up for his good mate Frenchy.

Racing was at its best with Baz Murphy and Frank Cassella full throttle dueling it out lap after lap resulting in what some say was one of the most spectacular mid-air crashes of all time! Even after collecting confetti, both pilots still had huge smiles on their faces as I am sure the adrenaline of action and a great sense of comradry being the winner. 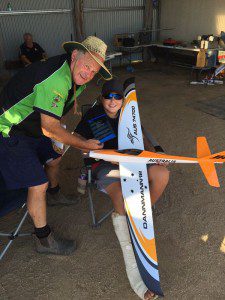 After 8 rounds of F3D Steely and Ranji finished with second and third place respectively for the weekend but the 1st place trophy went to Dannmann flying out of a swivel chair which he self propelled with his left foot (his right foot in plaster after nasty ankle surgery for a reoccurring tendon issue flew). A huge sense of achievement for Dannmann with the ever reliable Baz set up saw Dannmann fly at his best with ripper times and also recording the fastest time of the weekend of 58.28 seconds.

The big race for the annual VMPRA Season Championship trophy’s is almost over with season leaders remaining unchanged with Dannmann now on 55 points further extending his lead in F3D, Brain Steel 1st place with an aggregate score of 56 points in F400. Jim Orenshaw is currently running in 1st place in Q500 with 56 points with John Schmidli only a few points behind. 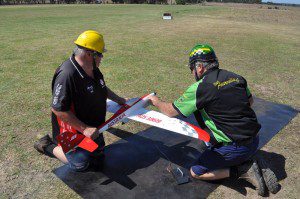 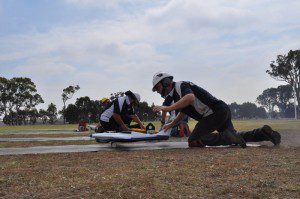 No change for the top position, but Barry Murphy has moved up to 2nd and Glenn down to 3rd.

No change for these positions.

For Q500, again there was no change for the top 3 positions.

Once we disregard the Saturday results due to the time system anomaly there was no change to the fastest time for all classes.

We have a Q500, Scanner and Sports 40 pylon race on at the Westernport Model Aircraft Club down at Crib Point on Sunday April 3. There are a number of us going down on Saturday to practice, share a spit roast dinner and stay over night ready for racing on the Sunday.

2 weeks later (April 16-17), we will be down at Warrnambool for one of our regular 3 class races.

Make sure you have all the date noted down. You would want to miss one!
http://vmpra.org.au/event-calander-2/ 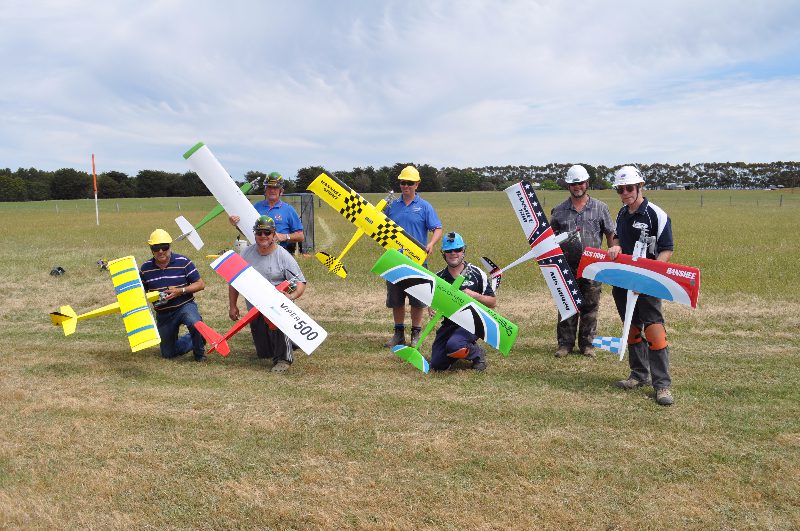