Once again a great week end was had down at Barry Murphy’s superb pylon racing field at Munro in Gippsland. The weather forecast was for fairly good conditions. There was a really good turnout with 12 compeditors in FA1, 11 flying F400 and 9 flying Q500. It was great seeing interstate competitors there also in Ranjit Phelan and Tony Howse.

It was a very impressive collection of caravans, trailers and gazebos with the addition of Andrew and Daniel Arapakis’s Basecamp van complete with Dannmann18 livery.

We flew 9 rounds of each class with 4 rounds each for F400 & Q500 and 5 rounds of FA1 on Saturday and the balance made up on the Sunday. This was officially the “John Hughan Trophy” event and trophies were given out at the end of racing on the Sunday. John Hughan was a very big influence on pylon racing in Victoria, Australia and internationally. Most of us flew with John in the past and it is fitting that we remember him with this event.

On Saturday Q500 models were randomly scrutinized checking props, muffler baffles, intake venturis and weight. It was great to see this happen. Also there where cut judges on 2 & 3 all weekend which also kept us honest and the racing very competitive. Thanks to all who volunteered to judged on all the pylons. It’s important for the health of pylon racing to run our races this way. 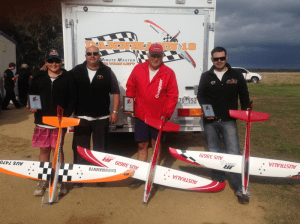 No change in places from Camperdown with The “Minute Master” Crew coming 1,2 and 3 again. Daniel was only 0.1 of a sec behind Barry after 9 rounds. 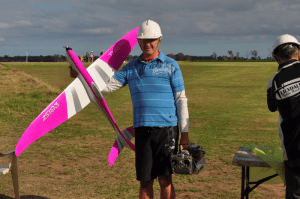 Now with only one event left for the 2013-2014 Season Championship, we are really down the business end. But also it’s time to consider starting a-fresh for your assault on the title for the 2014-2015 Championship.

No change at the top with Barry Murphy still in 1st and Brian Steele in 2nd, but Glenn Matthews has jumped up to 3rd place displacing Gary Davidson. It’s tight between these two. 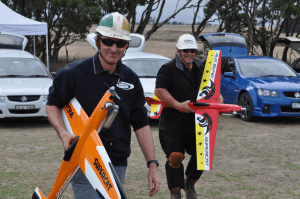 A pair of Super Cats

Glenn Matthews and Andrew Davies are drawn on equal points. It’s a very tight battle at the top for these two. Gary Davidson remains in 3rd place.

Top position is now John Schmidli with Daniel Arapakis in 2nd having been equal after the Camperdown event. Jim Orenshaw remains in 3rd.