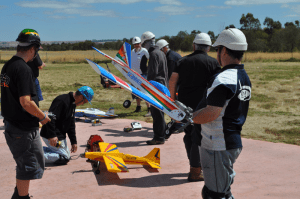 Not sure how many people we would get to this event, the good weather and an location that is close to Melbourne, brought out a good number of people. We ended up with 12 Q500, 4 sports and 2 EF-1 pilots. There was a couple of Scanner pilots there but it is a little surprising that with the popularity of this model and the scanner racing program, that there wouldn’t be more interest in going racing more often and trying out flying the international recognized FAI pylon course. Theoretically, I believe the Scanner actually conforms to the Q500 rules, so could be flown as a Q500. A good way to start.

We ran 4 rounds of each class before lunch and another 3 rounds after lunch. There was no helpers for the event so, we took it in turns with Pylon#1 and being starter. I think all who attended had a good time. 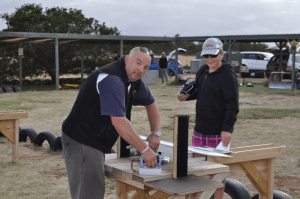 Daniel was blitzing the field again with some fast time.  Unforntuneately, a model that Barry Townsend and Tony Curzon were sharing was written off in the first race.

There was a bit of a mix of planes in this class, but all where able to work on improving their times. Tony Curzon’s Nemesis was flying very nicely and looked the part going around the course. 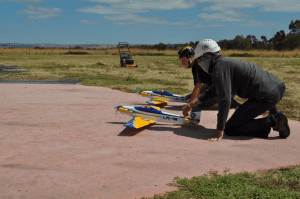 Unfortunately Walter Muller’s plane was damages during a take-off incident, so Alan Swift flew 4 round on his own.

With only 2 races left for the championship, the battle at the top has seen Daniel Arapakis catch up to John Schmidli (myself) on equal points with only accumulated times leaving me at the top (for now)!

The next full FA1, F400 & Q500 2 day event is at Bazza’s paddock down at Munro on March 22-23, 2014. Sure to be a good turn out as this is a great venue for pylon racing. As this is a private flying field, if you are interested in attending this event and don’t know the location, can contact the committee for the address. 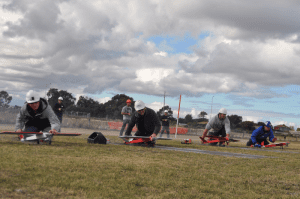 What great weather and fantastic turnout we had for our annual Q500, Sports  EF-1 event held at the Werribee Club last Sunday. This event is close to Melbourne and is always a good opportunity for newcomers to pylon, to have a go without travelling too far. At this very event, 12 months ago, a young lad named Daniel Arapakis came along with his trainer and flew pylon for the first time. Fast forward 12 months and he’s winning events flying his Vipers and on this day, test flew his first F400 model.

Six rounds of each class on a 10.5 lap FAI long course was flown so times can be compared to previous events. 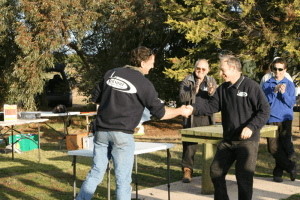 With 11 competitors, I think this is the most we’ve had in the last 4 years that I’ve been back flying. There was only 4.2 seconds between the place getters’ and only 1 plane came to grief (think Matt and shipping container!). Jim Orenshaw racing his brand new airframe (his own design) and engine combination came first with Daniel Arapakis only 1 second behind.

All had a good day’s racing except Andrew who’s engine seized in the first race of the day. Was this one of Daniel’s old engines? Hope to see you flying at the next race Andrew. 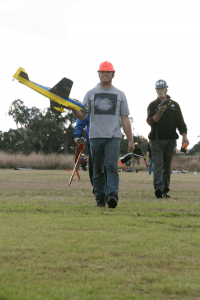 The walk back, Mark with his EF1

This class is slowly gathering momentum with three entries at this event.

Mark French flew his Shoestring, Walter Muller and myself, Pogo’s. All three models used the same E-Flite outrunner motors with different combinations of ESC’s and LiPo’s.

Finally some good weather in Melbourne and six rounds were flown. Mark was experiencing ESC problems (possibly due to overheating) which caused a reduction of power towards the end of each race and Walter flew very consistently to improve his times throughout the day.

Many thanks to the Werribee Club for hosting this Pylon event, providing catering and pylon marshals. 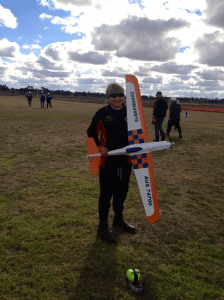 With only the AMPRA/Munro event left to run for the 2012 – 2013 Championship, this is the situation as it stands;

Glenn Matthews and Barry and Beau Murphy will be fighting it out for 2nd and 3rd place.

F400 – It’s really tight at the top with Tom Wetherill, Jim Orenshaw and Andrew Davies battling out for the places. Gary Davidson and Glenn Matthews also have a chance of getting into the placings.

Q500 – No change in the top 3 positions but James Hurley has dropped away from the top by 4 points.

Next year’s championship starts with the July 13-14 event in Bendigo, so it’s now time to prepare and plan your assault on this title!

AMPRA – This is a national pylon event and it’s being held here in Victoria, so there will be a lot of flyers from interstate. This is the big event for the year. Check out this AMPRA page for details.

John Schmidli - (Thanks to Allan Swift for the EF-1 report) 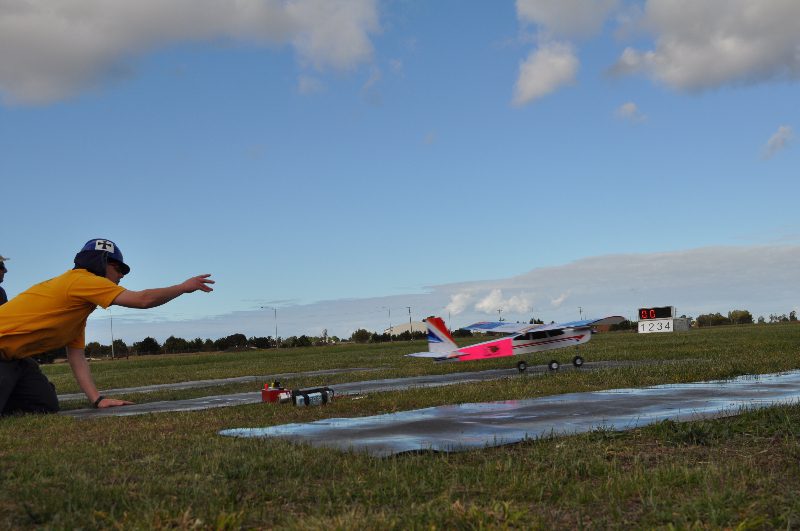 The Q500 race is the penultimate round of the 2012-2013 VMPRA championship which ends at the following event to be held at Munro.

Sports pylon covers a large range of models from trainers to low wing sports planes, typically of a 46 sports engine size. It’s the best way to start pylon racing. Only 12 months ago, Daniel Arapakis was flying a trainer around the pylon course and now he’s up there with the fastest competitors in the Q500 class. 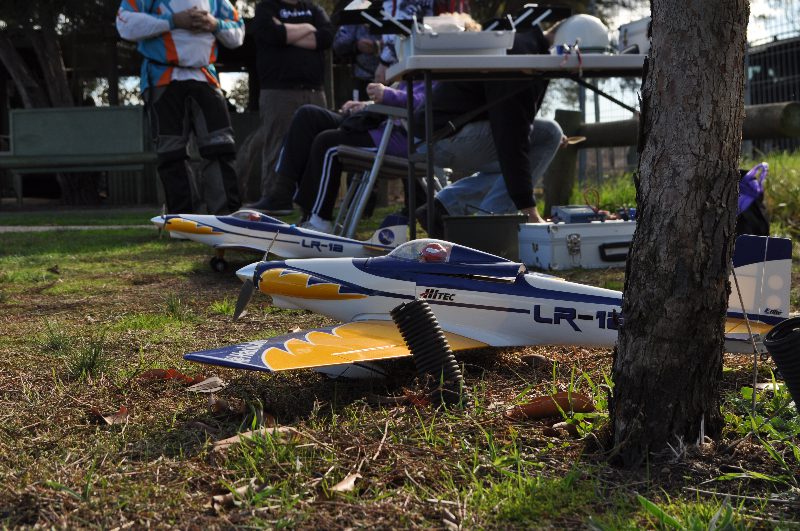 EF-1 (electric formula 1) is a fairly new class for electric flight. There are a range of ARF models that can be purchased for this class and is an inexpensive way to go racing.

For many years, John Hughan wrote a pylon racing column in Airborne magazine (http://www.airbornemagazine.com.au/). Ever since John stopped producing this column, Airborne Magazine has been looking for a contributor to write pylon racing related articles on a regular basis. Having pylon racing represented in Airborne Magazine is a great chance to publicize our most exciting facet of aeromodelling. With AMPRA & the World Champs coming up soon, it’s a great time to start.
If anybody feels they would like to give this a go, please let me know. 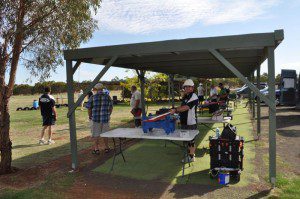 On yet another very warm day, we headed off to the Bacchus Marsh model aircraft club to race the introductory classes of Q500, EF-1 & Sports. The intention of this event is to give people a chance to try pylon racing for a first time or to encourage those new to pylon racing to improve their skills.

James Hurley and I where first to arrive at the club and were given a friendly welcome by  a group of local club members already there with BBQs setup and chewing the fat. 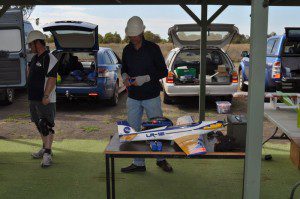 Due to an over-site when the event calendar was put together, this event was scheduled for the Sunday of the Labour Day long weekend (in Victoria). As a result there were pretty low numbers and no new comers to give pylon a go. There was still a group of 8 flyers there plus David & Toni Axon along with some Bacchus Marsh members, there to help run the event.  We decided to go ahead and get 5 rounds complete, have lunch, presentations and pack up early to escape the hottest part of the day. Funnily enough, I was last to leave and it had started raining as I drove out of the club. Who expected that! 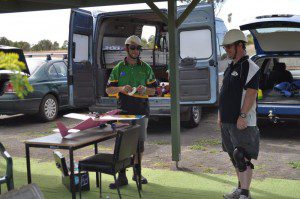 Out of the 8 flyers, 5 of us flew Q500 models and this would contributed to the season championship. The other 3 were a variety of models. Alan Swift with a (legal) EF-1 model, Terry O’Connor had an electric converted Quarter Midget model (very similar dimensions to the EF-1) and Tom Wetherill flew a composite/pylon style IC model.

I think we all had a good time. I certainly know I did and any chance to fly around the course is another chance to improve your flying.

Check out the full results >>>

Note that the course was not measured out so times are not indicative of our usual results.

I didn’t manage to get many photo on the day due to there being only 3 heats per round. Anybody interested in contributing to this website, It would be great if you would like to:
1. Take photos of the event,
2. Write an event report.

Any help would be appreciated. Let me know if you would like to help out in any way.